THE STORY TO DATE

Manlok Ng, founder of KwikFold Bikes began his business in 2012 shortly after completing his Masters Degree at the University of Exeter. He and bike designer Sam Shen developed the first prototype bike, and launched it to the UK and European market.

The concept behind the bike is for it to be designed for a wide audience, from commuters to leisure cyclists. It’s unique folding mechanism means that not only does it fold quickly, it can also be wheeled along in its folded form making it practical, pragmatic and portable.

The two working partners then put up a series of product development ideas, plans and designs. It was hard work to begin with, the first prototype required careful planning and fine attention to detail. Every component needed to be specifically selected to best compliment the design and functionally of the bike.

After all this was achieved. The first series of bikes were assembled via a co-operated manufacture and was named the 'One-Second Folding bike'.

The 'One-Second Folding' bikes were launched on eCommerce venues to generate public interest and feedback. Within the first few months, a full container of the 'one second folding bike' was sold over the e-commerce platforms.

Confidence was quickly built from the positive feedback of customers. The decision to form a limited company in 2015 was made, under the name 'KwikFold' the products USP and its unique quick-folding mechanism.

Further improvement where developed, KwikFold modified and re-developed the bike frame to a more practical shape, allowing the bike to be pulled via a handle bar, and locking devices utilised to create a more stable form when folded.

Under the ownership of Manlok Ng and KwikFold Bikes Ltd, this new unique appearance has been registered with its design rights exclusively in the UK and the Euopean union.

The second series of the KwikFold bikes were made and launched at the Gadget Show NEC Birmingham in 2016. The response from the general public was remarkable, as significant numbers of units were sold at the event.

The new design created significant interest from the public. The KwikFold bikes were soon recognised by Amazon and became an Amazon Prime product.

During the year 2016-2017, KwikFold Bikes further developed its brand through marketing its product at many other public events, including a promotional store which was opened at the popular shopping centre, the Bullring in Birmingham; holding exhibitions at the NEC cycle show and the ideal home show in London.

The coming 2018, KwikFold has plans to expand its business from e-commerce to in store retailers. KwikFold is aware of the significance to innovate and towards product quality and development to retailers, and has achieved a higher quality standard for the upcoming KwikFold Xite range of Bikes.

The new KwikFold Xite has improved its folding mechanism which makes the bike fold smoother than ever. In addition, the use of world class standard manufactured components has helped to provide a finish that itself gives a more fresh, stylish and luxurious appearance. 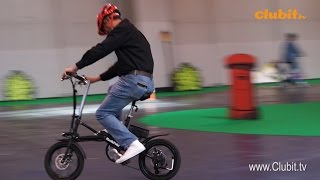